Dumfries took the opportunity of a free Saturday to play Biggar who also have qualified for the National cup competition that starts on 18 January. Biggar have won the Edinburgh League and travelled to Dumfries undefeated this season. 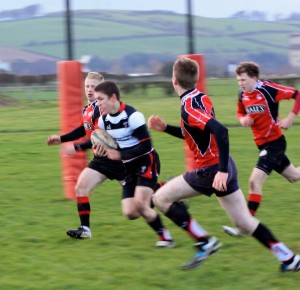 Both teams had players missing and settled for a 14 a side game. 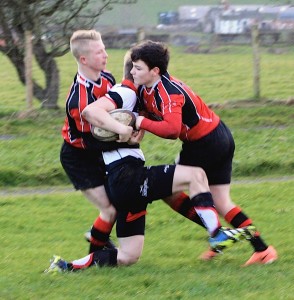 Dumfries ran up 6 tries through Declan O’Donnell,  Gavin Howatson (man of the match), a couple from Scott Goodwin, Kyle Lindsay and Euan McMorran (getting his first Saints try and on from the start). James Clyde converted 5.  In a very open and closely-fought game Biggar managed to get 5 tries of their own with one converted.

Gavin Hill, Biggar coach said ” this was an ideal opportunity for us to take on a side that is in the Cross Border League and the Dumfries standard was very good – in particular very strong in the forwards”

All eyes are now on the SRU website for the draw for the National cup which takes place on the 06 January, 2014.  The other teams left in the competition are Boroughmuir, Ayr, Highland, Stirling County, Jedforest and Melrose.